It was a painful breakup.  I thought things were going fine, but “it’s not you” she said “it’s me”…. and just like that, our relationship was over.

I really didn’t see it coming. We have been working together for a long time now.

Really?  Really, I said.  You no longer need QA?

She went on to explain that as her team has gotten better and better at building software, the whole team has taken more ownership of quality. They are on a pretty consistent cadence now and have working tested software ready to ship every two weeks...which is just about the time it used to take to just get through a QA testing cycle.  “We are just moving way too fast for that nowadays” she said.

At first I was incredulous. Everyone needs quality assurance!  QA is an essential role!  You can’t just pump out code and hope it is good enough. The customers would crucify us for that. At first, I thought what she was saying was ridiculous, but the more she explained it, the more it started to make sense. Her team had started Test Driving development a couple of years ago and now they have really high levels of confidence in the entire codebase. “It’s a team quality thing” she said.

I knew this team was good. The code is both Clean and SOLID. Their quality metrics are on par with any other team. They consistently produce 90% automated test code coverage, including code branches. Code reviews made sure that everything was covered, and they had automated jobs that broke whenever they decreased that coverage. Ultimately, they have virtually no defects that get into Production; some of the best code there is. They also have automated acceptance tests, UI tests and load and performance tests. They have pretty much automated the entire testing pyramid. 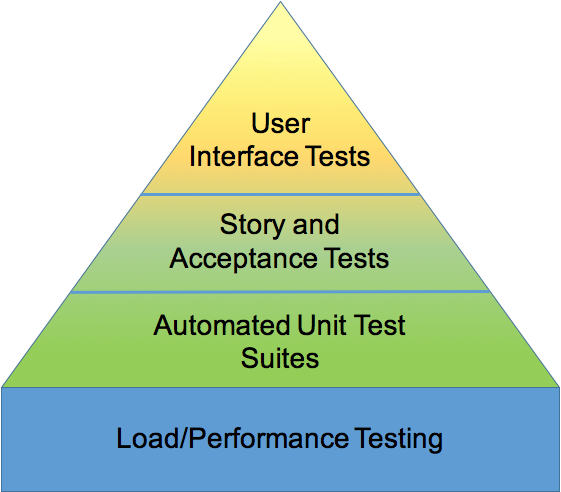 Test Driven Development (TDD) was just the start though. Soon after the programmers were test driving, the QA folks started automating UI tests in Selenium. To learn how, they had been pairing with programmers and their relationships in the team were the best of any of my QA teams. After that, they started using CucumberJVM to build behavior tests with the Business Analysts and the Product Owners. The pace of development with this team was better than any other team and I had pretty much let the team run on autopilot because they never seemed to have the same kind of problems the other teams have.

“So you do need us” I said. “Oh yes” she said, “your people are great, but let me explain. We still want all the quality experts we can get.  As long as they are committed to the team, are committed to continuing their learning, and stay with the team every day”.  She looked right at me and said, “What we don’t need is all the management oversight we used to have”.

I was beginning to understand. I realized that she still wanted quality. In fact, she was more dedicated to quality than just about any other team in the organization and we are a huge organization. She was advocating for a level of quality the other teams could only hope to duplicate.
She went on to say, “we’d like to keep some of your team members if we can”.  “What do you mean?” I said. She went on…”Most of your team members have embraced the changes we have introduced.  They love test automation, learning and the collaborative nature of how we produce quality now.  And those folks have a place on our team.” She went on, “The QA folks really took a leadership role with exploratory testing. We want to keep them because they see things differently.  They look for anomalies and edge cases and they really help the team round out all the aspects of testing that we need.”

Granted, this team has really taken agile adoption and self-organization seriously. They really epitomize teamwork. They do not behave like an assembly line, passing work from one role to another.  They’ve eliminated a lot of the limitations of specific roles in the team room through organized cross-training and pairing. For just about any task, most anyone can pair with someone if not complete the task themselves outright.

“But we move fast now, as a team” she said.  “And I guess what I’m saying, is that we want to keep your folks on the team and...well, there’s still a lot more that I can go into, but the short answer is...We just don’t need a QA Lead anymore.”

I was crestfallen. The breakup wasn’t painful from her perspective. The pain was all in my head.  It was just a matter of my realization that self-organizing teams don’t need as much management as a traditional team.  The whole team owns quality now, and, I suppose, in the long run, that’s going to turn out to be a really good thing.